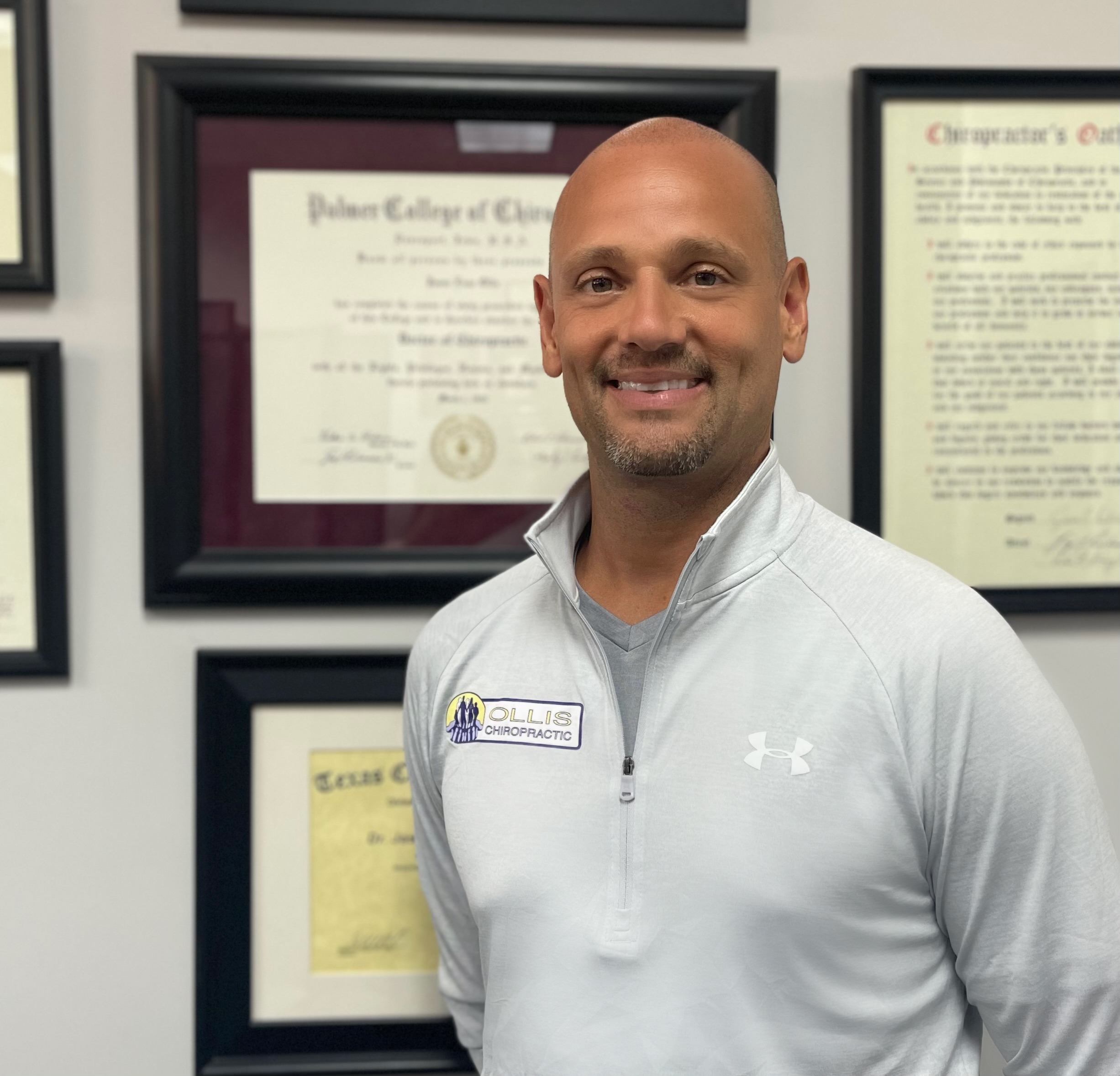 Dr. Jason grew up in Holland, Muskegon and lastly, the Upper Peninsula of Michigan.  After graduating from Munising High School, he attended St. Norbert College in DePere, WI (Green Bay area).  There he received his Bachelor of Science in Biology before moving to Davenport, Iowa to attend Palmer College of Chiropractic, where he received his Doctor of Chiropractic degree.

After receiving his Doctor of Chiropractic degree from Palmer in 2002, he moved to Louisville, KY.  2002 was a busy year!  Dr. Jason graduated from Palmer in March, married his wife, Terri in July and opened Ollis Chiropractic in October.  For decades, Dr. Jason  has provided spine and extremity care, postural corrective spinal care, and nutritional counseling.  In addition, he  educates patients, physicians and therapists about the importance of proper footwear and its effects on the spine and lower extremities.  For years he has worked with several shoe companies that recognize proper design.  Dr. Jason has been expertly trained in Diversified, Gonstead, and Thompson adjusting techniques, as well as received an award for Toggle Recoil technique.  He also provides upper and lower extremity adjusting.  He is trained in the Pettibon System spine and postural corrective technique

Dr. Jason is the oldest of five children and is grateful to have his parents, his brothers and his sister Emily located here in Louisville.  His other sister, Abby, is a Naturopathic Doctor and is married to a Chiropractor in Pennsylvania, where they practice together.  Dr. Jason and his wife Terri have four children:  Ivan, Pryce, Ander and Henrik, and live in Fisherville, KY.   He passionately enjoys his job and genuinely stays super excited teaching people about human health and caring for patients.   When he isn’t enjoying his family or running kids around, he enjoys Bible study, working outside, fishing, the Green Bay Packers and is a “car guy”. 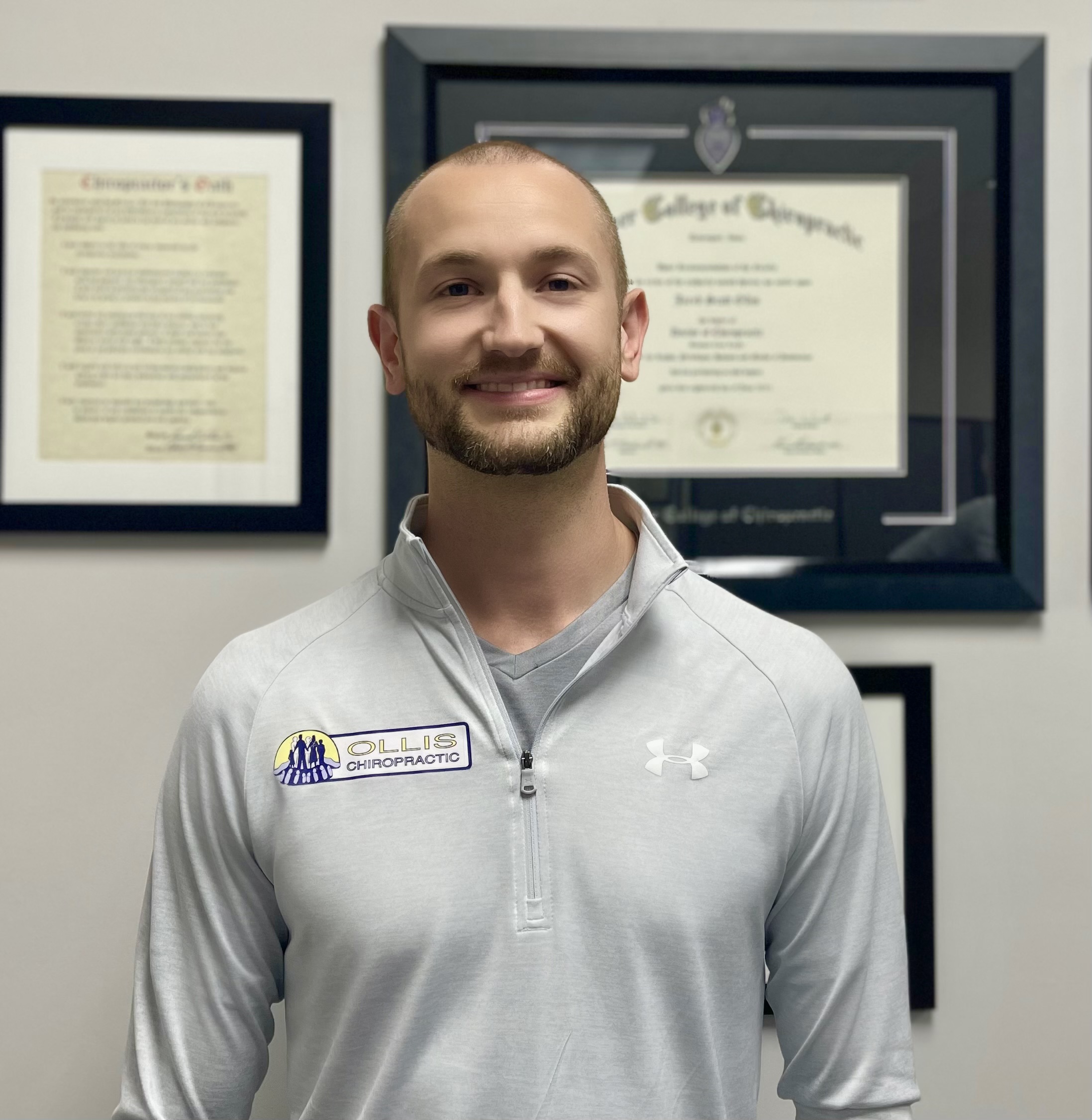 Dr. Jared was born and raised in the Upper Peninsula of Michigan.  After graduating high school, Dr. Jared enlisted in the U.S. Army, and served on active duty from 2010 to 2014 as a paratrooper in the 82nd Airborne Division at Fort Bragg, North Carolina.  After completing his initial active duty contract, he enlisted in the U.S. Army Reserves where he served as a paralegal and noncommissioned officer in the Army’s Judge Advocate General’s Corps for an additional seven years.

During his time in the Army Reserves, Dr. Jared received his Bachelor of Science in Biology from Fayetteville State University in Fayetteville, North Carolina.  He then moved from Fayetteville, North Carolina to Davenport, Iowa to attend Palmer College of Chiropractic, where he received his Doctor of Chiropractic degree along with an Academic Excellence Award and was the 2020 ChiroHealthUSA Foxworth Family Scholarship recipient.  In the summer of 2021, Dr. Jared moved to Kentuckiana to serve the greater Louisville area alongside his brother, Dr. Jason.

Dr. Jared comes from a chiropractic family, and has wanted to be a chiropractor since he was eight years old.  He is very passionate about helping his patients, family, fellow church members, and anyone else that will listen achieve their health goals.  To bring his passion to fruition, Dr. Jared offers quality spine and extremity care, postural corrective spinal care, and nutritional counseling.  Dr. Jared has been expertly trained in Diversified, Gonstead, and Thompson adjusting techniques, as well as extremity adjusting through his core chiropractic curriculum and the Council on Extremity Adjusting.  He is also trained in the Pettibon System spine and postural corrective technique.

In his spare time, Dr. Jared enjoys spending quality time with his wife, children, extended family, and church family.  He and his family are active members of Oak Park Baptist Church in Jeffersonville, Indiana.  He greatly enjoys studying the Bible and its history, Christian theology and philosophy, and Christian apologetics.  Dr. Jared is also an avid kombucha brewer.  When he isn’t doing any of the above, he can probably be found reading up on health and wellness or writing a blog.  Dr. Jared resides happily in Jeffersonville, Indiana with his beautiful wife, Kirsten, and their two children. 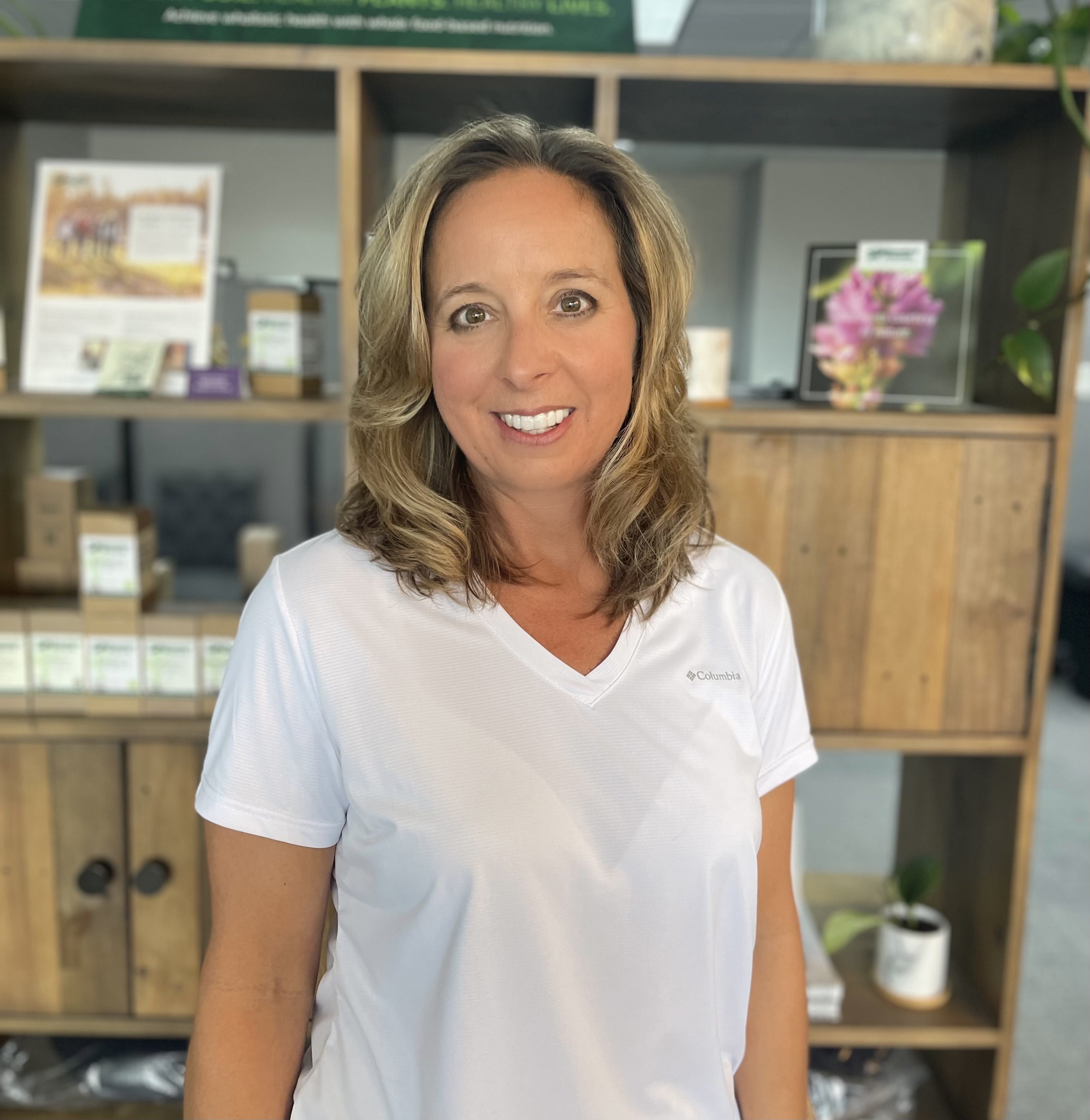 Wendy is the Head of Spinal Rehabilitation at Ollis Chiropractic.  Her daily responsibilities include leading patients through spinal rehabilitation, which aims to improve such things as spinal health, mobility, balance, and stability. She enjoys coaching patients on postural correction exercises that address spinal curvature, muscle imbalances, and movement patterns. Wendy is a Michigan native, but also called Las Vegas, Nevada home while she was in her teenage years and early twenties.  She moved to Louisville in 2011 and has enjoyed all that her Kentucky home has to offer, from all things horses to hiking and boating at all the beautiful lakes.  Wendy has also lived in Austin, Texas and Toledo, Ohio where she received an Associates Degree in Cardiovascular Technology from the University of Toledo.  She also attended Bowling Green State University and Ivy Tech Community College with a focus on nutrition and physical therapy.  Wendy has her Personal Training certification through the American Council of Exercise and holds various certifications with the Aquatics Exercise Association in water fitness and rehabilitation.  Wendy will be pursuing another certification as a Corrective Exercise Specialist (CES) through the National Academy of Sports Medicine in the fall.  Wendy’s background includes over twenty years of teaching various fitness classes and experience in facilitating specialized weight loss programs.

Some fun facts about Wendy:  She has enjoyed being married for over twenty-three years, is a mother of three girls, one fur baby, and four turtles. Her two oldest girls attend college at the University of Louisville and Eastern Kentucky University… Go Cards and Colonels!  She lives for the moments where she spends time with her family boating and hanging out at the lake.  Her favorite hobbies include swimming, dancing, hiking, biking, boating, reading, photography, and traveling.  Some goals and accomplishments she is most proud of are being a mother to three amazing girls, graduating college with honors, and hiking Angels Landing in Zion National Park, which was voted as one of the top ten most dangerous hikes in America.  Her future goals include visiting all of the National Parks (less than 10 to go), travel to Italy and Greece, go white water rafting, read the Bible, learn to play the piano, and continue to meet new people and learn new things. 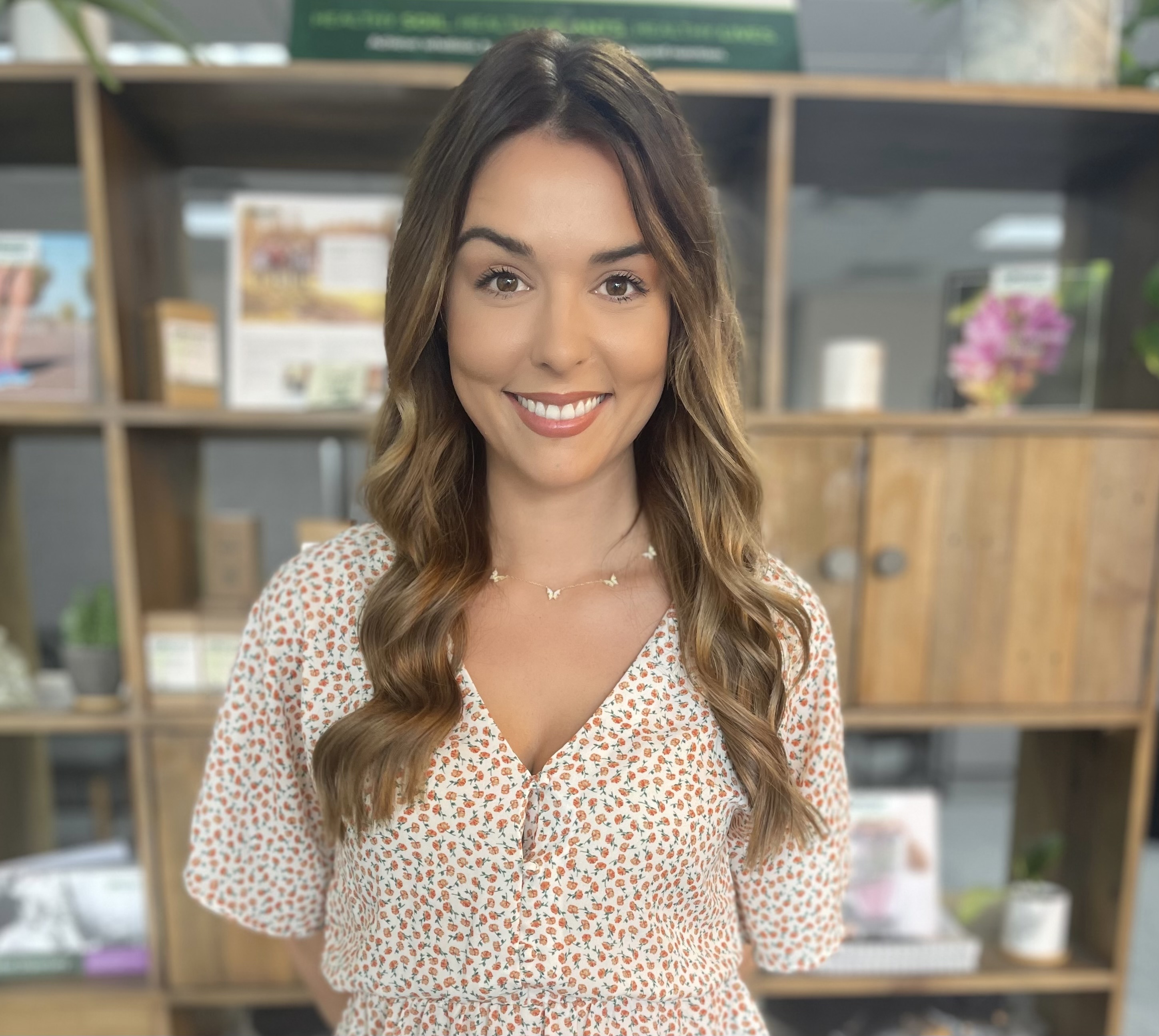 Hannah is the Office Manager at Ollis Chiropractic.  Hannah was born and raised in Bowling Green, Kentucky. She has lived in Louisville since 2007 where she attended Assumption High School - Go Rockets!  She later graduated from Bellarmine University with a Major in Exercise Science and a Minor in Communications. Hannah comes from a family of 4 and has a younger sibling named Holly. Together they enjoyed playing basketball, volleyball and horseback riding.

When Hannah is not in the Office, she loves cooking and crafting new recipes with her Husband, Jake. She is a self-proclaimed Chef with the majority of her recipes being Pinterest inspired. Most recently, she’s been working her way through the One degree of Change Standard Process cookbook. She favors Spanish, Mediterranean and Creole cuisine, but is open to tasting just about anything!  She has several years of experience in the restaurant industry with the most recent title of General Manager at First Watch Highlands.

Aside from cooking, Hannah also enjoys breaking out the kayaks on a sunny day. Her favorite spots are in Long Run Park and Floyds Fork. Whenever she’s feeling the need for speed, Hannah and Jake can find themselves out on the Ohio with a jet ski! In addition to outdoor activities, Hannah is a major homebody. She’s fascinated by anything DIY and loves projects that add charm and character. She attributes her fascination with home improvements to her Dad, Gregg, as they spent countless hours back in the day watching This Old House. They even called each other “Steve” and “Norm.” Her proudest creation was a beaded chandelier that hung above their dining table in their old home.

The best fact about Hannah is that she is a BIG cat person! She and Jake have three fur babies at home: Poozelle, Sweetie and Berly. They have their own Instagram page (because why not?) and Berly is currently in the running for America’s Favorite Pet of 2022!

Find us on the map